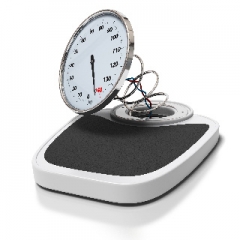 A large new study shows that obesity and pain often go hand in hand. That appears to be true even if an obese person is otherwise healthy. Researchers say that begs some questions: Can extra pounds cause pain? If so, how does fat make us hurt?  A slew of chronic conditions that cause pain are also more common in people who are overweight and obese. Those conditions include arthritis, depression, fibromyalgia, type 2 diabetes, and back pain.  So the assumption has been that being obese makes a person more likely to have multiple medical problems, and many of these conditions may cause pain.

The new survey, however, which included responses from more than 1 million Americans, found that the relationship between obesity and pain persisted even after researchers tried to account for the influences of other pain-causing health problems.  “Being sick can cause pain, but that doesn’t necessarily take care of the relationship between obesity and pain,” says researcher Arthur A. Stone, PhD, distinguished professor and vice chairman of the department of psychiatry at the Stony Brook University Medical Center in Stony Brook, N.Y.

The study is published in the journal Obesity.

Obesity and Pain in America
For the study, researchers relied on data collected by telephone surveys conducted by the Gallup organization from 2008 to 2010. The majority of survey participants were white (85.1%) and had at least a high school education (94.2%).  Every survey participant was asked to report their height and weight. Based on that information, 36.8% of people in the study fell into the low or normal body mass index (BMI) category, 38.3% were considered overweight, and 24.9% were considered obese. People were asked if they had experienced physical pain the previous day. They were also asked if they had neck, back, leg, or knee conditions that had caused pain during the last 12 months, or if they’d experienced any other condition that caused recurring pain.

They were also asked about the presence of a variety of other medical conditions, including high blood pressure, high cholesterol, asthma, diabetes, heart attack, and depression. Researchers found that as weight increased, so did the likelihood that a person would be experiencing pain. Compared to normal-weight people in the survey, people in the overweight group — those with BMIs between 25 and 29 — had about 20% more pain. People with BMIs between 30 and 34 had about 68% more pain. Those with BMIs between 35 and 39 had 136% more pain, and those with BMIs over 40 reported having 254% more pain. As expected, chronic pain conditions accounted for a good portion of those results. And researchers recognize that the relationships between chronic health problems and pain and obesity are complex. In some cases, it could be that having arthritis makes a person less likely to move around, which makes them more likely to gain weight. In others, it may be that being overweight puts strain on the joints, which leads to joint problems that cause pain.

When researchers accounted for the influences of other health problems and pain causing conditions, being overweight was no longer associated with being in pain.
But people who were obese still reported more pain than those with normal BMIs. Researchers caution that their findings are just an association. They don’t prove that fat alone causes pain.  But they mirror a handful of other, smaller studies that have also found links between pain and obesity, even when there were no other chronic conditions to explain the findings. So they say it makes sense that there might be another mechanism connected to having a lot of fatty tissue or to problems with the body's metabolism that might explain the pain.

The study wasn’t able to explain how fat might cause pain.  But Stone says that fat cells are known to make chemicals that increase inflammation. “And we know that inflammation is very closely linked to pain perception, so there’s the possibility that there’s some connection through that kind of process."  He says those questions will ultimately need to be addressed by other researchers.